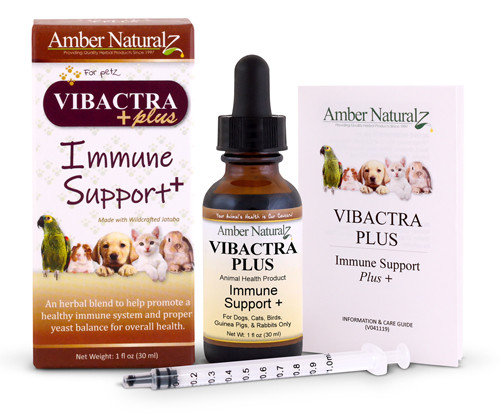 Vibactra Plus is a natural herbal antibiotic that was created to be used in conjunction with Paxxin. Many Parvo imitators are giving a false positive on the Parvo test. Vibactra Plus and will help heal these Parvo imitators therefore giving peace of mind knowing that your dog is being given the right herbs to fight the disease.

Vibactra Plus and Paxxin or Kitty-DT can to be used together to treat Parvo, Feline Distemper, and other intestinal diseases.

A major component of Vibactra Plus is olive leaf, famous for its immune enhancing properties. This further defines Vibactra Plus as both a natural antibiotic and antioxidant. It's no wonder that Vibactra Plus also intensifies resistance to common infections, such as the common cold and flu.

Free radicals result from normal body function, to include clearance of infections by the immune system. These free radicals have been clearly linked to cancer and degenerative disease. In the normal course of clearing an infection, the body produces more free radicals than normal, and in a compromised state of illness, those free radicals are more difficult to clear. Vibactra Plus supports the body in this critical function of clearing free radicals to help prevent these more serious sequels to infection.

Vibactra Plus is designed to:

When to use Vibactra Plus: