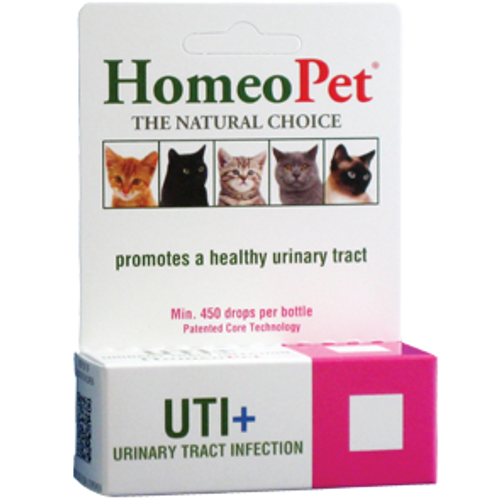 Feline UTI+ NEW!   Provides relief from urinary tract infections by easing burning improves healing tackling the anxiety often at the root of the problem supporting kidney funtion Dosage : Kittens/puppies - 5 drops per doseAdult Cats - 10 drops per doseMultiple cats - 5-10 drops per cat in community water, once daily for 14 daysFelines and pets under 1lb - 1-2 drops in min 8oz water, 3 times dailyDogs under 60lbs - 10 drops per doseDogs over 60lbs - 15 drops per dose To start, dose every 30 minutes to an hour for 4-8 doses. Once improvement begins, change the dose to 3 times daily until symptoms clear. When the condition has cleared, stop dosing. You can always restart dosing if symptoms recur. YOUR PET'S SYMPTOMs Burning Difficult or inappropriate urination Urine abnormalities (ie blood, mucous, or pus in the urine, odor and color changes either with or without the presence of crystals gravel or stones) Chronic and acute cystitis and nephritis ADDITIONAL INFORMATION   ADMINISTRATION:Optimally, the liquid preparation should be dropped directly on to the mucous membrane of the mouth, including the lips, by raising the head until the mouth opens. Where an animal finds this distressful or an owner is unable to comply, the medication can be put in the food, water, or milk. Where a cat or pet is sensitive to the odor of the alcohol preservative, a 10-20 minute period should be allowed for it to dilute and evaporate before the liquid or food is presented to the patient. Occasionally, animals will shake their heads as a response to the alcohol preservative, or cat may salivate excessively--in these cases presenting it in food, water, or milk works. ADVERSE EFFECTS AND CONTRAINDICATIONS:None known other than reversible effect of overdosage. Overdosage will result in a return of symptoms after the symptoms have initially disappeared. Where a return of symptoms occur while on the medication, ceasing to use will alleviate the effect. Patients who are hypersensitive to homeopathic preparations will show response to a single dose, which may not need to be repeated for some time. For this reason therapy should always start with a single dose the previous day and should a major response be seen, therapy should not be recommenced until symptoms relapse and then only a single dose given for maximum effect. Although there is no evidence that there are any safety issues, extra care should always be taken when dealing with pregnant animals. Should a suspected adverse reaction be seen or advice needed, pleases contact HomeoPet, LLC. DRUG INTERACTIONS:None known for animal use; keep out of reach of children. PHARMACEUTICAL PRECAUTIONS:Store at room temperature, out of direct sunlight, and away from strong odors. USER SAFETY:No adverse effects have been recorded. There have been reports to the company of beneficial rather than adverse effects. As homeopathics are active in humans care is advised when handling product, although a long history of homeopathics used in humans shows a very high safety margin. ENVIRONMENTAL IMPACT:To date none found. Authorization #, NDC # 61571-444-10