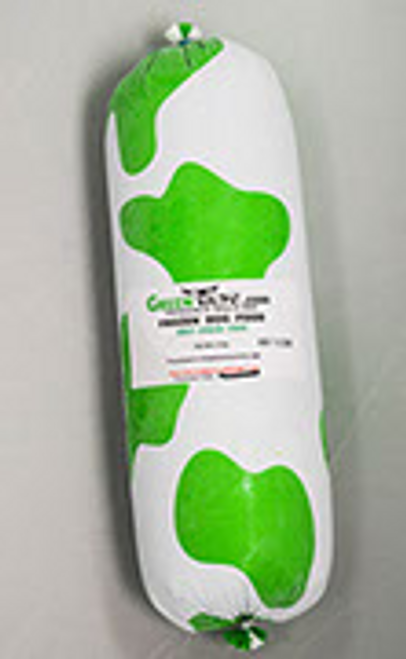 Puppy Grind / Fine Grind Green Tripe from all natural grass-fed beef - great for small dogs, puppies, and cats. Green Tripe is the stomach of ruminating animals. These animals (i.e. cattle, buffalo, sheep, deer, goats, antelope, etc.) are classified as being four-footed, hooved, cud chewing mammals with a stomach that consists of four chambers. The four chambers of such a stomach are known as the rumen, reticulum, omasum, and the abomasum. The food the animal eats (i.e. grass, hay) is swallowed minimally chewed and passes into the rumen and reticulum where it is then regurgitated, chewed, and mixed with saliva. It is again swallowed and then passed through the reticulum and omasum into the abomasum, where it is then further broken down by the gastric juices and other digestive enzymes. Yummy! So how can something so disgusting, be so good? These same gastric juices and enzymes not only aid the animal in digestion, but also aid the dog in digesting and efficiently utilizing his food when he consumes them. The amino acids are necessary for muscular development, and the other gastric juices are one of the best cleaners for their teeth! In an analysis of a sample of green tripe by a Woodson-Tenant Lab in Atlanta, Georgia, it was discovered that the calcium:phosphorous ratio is 1:1, the overall pH is on the acidic side which is better for digestion, protein is 15.1, fat 11.7, and it contained the essential fatty acids Linoleic and Linolenic, in their recommended proportions. Also discovered, was the presence of Lactic Acid Bacteria. Lactic Acid Bacteria, also known as Lactobacillus Acidophilus, are the good intestinal bacteria. It is the main ingredient in probiotics. Finally, because of its rubbery texture, serving it in large chunks also aids the canine in strengthening its jaw muscles and has an added benefit as a form of canine dental floss. The white tripe that you find in the grocery store has been cleaned, scalded, and bleached. It has almost no nutritional value for the canine. This tripe is usually found in dishes such as menudo. Green tripe does not necessarily refer to its color. In this instance, it refers to the fact that it has not been touched - not cleaned, not bleached, and not scalded. Its actual color is brown, however, sometimes there will be a greenish tint due to the grass or hay the animal ate just before slaughtering. Nothing beats the green tripe from a freshly slaughtered animal, but in an effort to make our lives easier, we now have available green tripe that has been ground and frozen, packaged in different size packs. Sources are from GRASSFED and ORGANIC animals that are USDA inspected and passed for Human Consumption. They are antibiotic free and no hormones have been added.